January 22, 2023: Celebrating Martin Luther King Day.   Dr. King often spoke of the evil triplet of Racism, Poverty and Militarism.   In his speech, Beyond Vietnam, he famously spoke of: “The greatest purveyor of violence on earth – my own government.”  This remains the case today.  He said “I cannot be silent,” and neither can we.

In that light, a number of us attended the yearly Syracuse University Martin Luther King Celebration Event.  We brought with us reminders of the third member of Dr. Kings Triplet, militarism, so often forgotten in these days of increasing poverty and racialized violence in the U.S.  Click to see our Flyer; Statement;

September 9, 2022: Time to Confront the Merchants of Death

Click here to view a slideshow of the protests at BAE in Endicott and Lockheed Martin in Owego, facing the Merchants of Death.  Change your ways!  It’s time support life!

Local TV Coverage on Channel 34.
(wait about five seconds to play this link first covered by an ad)

More coverage to come, hopefully to include musicians present at the event.

A short video by John Amidon.

We had a couple of excellent rallies with some press coverage.  BAE and Lockheed were suitably stressed.

Join us a BAE Systems in Endicott New York at 11 AM, and then at Lockheed Martin in Owego at Noon on September 9.   Practical Information for attending September 6 Rallies.

We will tell them its time to change their ways and their products.  Both companies make about 1% useful products that help us live better and 99% horrific weapons.  Let’s work to change their minds.  Read more about this issue: The Weapons Industry Transformed (with organization signators).  Click to download Flyer (pdf) or Flyer for Social Media, another flyer.

April 28, 2022: Latest court case dismissed In the Interest of Justice!

Directions from Peace Center to the park:   Left out of lower back driveway onto Westcott st. Go 2 blocks. Take a right onto Dell st.  Go 2 blocks. Take right onto Beech St. to Thornden Park Drive on left. Follow the road past the pool to the amphitheater area. Park along the road or circle around on the other side for more parking.

The First Earth Day:  Fifty-two years ago, twenty million Americans turned out for rallies and marches in a nationwide demonstration of concern for the environment intended to shake the political establishment out of its lethargy and force the environment onto the national political agenda.

Since then the Earth has gotten hotter. We have to go beyond changing our light bulbs and recycling and again shake up the powers that be. An unspoken key driver of climate change is militarism and war, and we will have to confront this in order to change the course of our climate crisis.

December 28: Upstate Drone Action held protests at Hancock Base Outside of Syracuse, and in Rochester and Binghamton at the Federal building to draw attention to the many innocent lives lost in the U.S. Drone attacks in Afghanistan, Syria and Iraq over the last decade on the Feast of the Holy Innocents, a holiday celebrated by Catholics and Christians throughout Europe and Latin America to commemorate the children killed by Herod in his attempt to block the new ‘king’ Jesus from coming to maturity.   Like Herod’s campaign of terror, drone warfare knowingly kills innocents to achieve broad coverage.

December 28: Mark your calendar, Protest at Hancock Air National Guard Base inspired by recent NYT reports showing what we have been saying for years about Drone Warfare!

Interview with Kathy Kelly on the Don’t Look Away Campaign:

11/26: Don’t Look Away Banners at Christmas Tree lighting ceremony in Syracuse near Hancock Base

11/11/21: On Armistice Day, the painting of Daniel Hale was unveiled at Cornell University to join the other portraits of ‘Americans who Tell the Truth‘ (More to follow)

10/28: UDA goes to NYS Senator Schumer’s  Syracuse Office, and then on to Hancock Base with their message.  Read the Action Report HERE.

Day of Atonement Actions on October 7 commemorate the beginning of the War in and on Afghanistan.   Day of Atonement Letter to Clerics, Press Release.  Stay tuned for photos and feedback from actions.

Upstate Drone Action stands in Solidarity with the movement to Shut Down Creech Airforce Base which houses the primary domestic aggregator and link to send pilot signals out of the mainland and receive feedback from killer drones flying over Asia and Africa. September 26-Oct 2

Upstate Drone Action spent the afternoon at the Westcott Street Cultural Festival in Syracuse, disseminating information on military drones and the U.S. Drone Program in  Solidarity with Shut Down Creech and Stand with Daniel Hale.  It was a beautiful afternoon and we handed out hundreds of flyers to receptive festival participants.

All Out to Hancock, August 20, 2021
for Ban Killer Drones National Days of Action

US and NATO forces were leaving, have left, Afghanistan … the US has frozen the funds of the Afghan government, even blocked their loan for COVID relief, in hopes that the Taliban will not have the resources to manage day to day governance successfully … and still US drones are flying over Afghanistan and bombing with impunity, killing families, women and children and householders.

Video above by John Amidon.

Daniel Hale Must be Pardoned!

We raise our voice in deep concern on the silencing and imprisonment of Daniel Hale. Daniel Hale did not commit a crime. 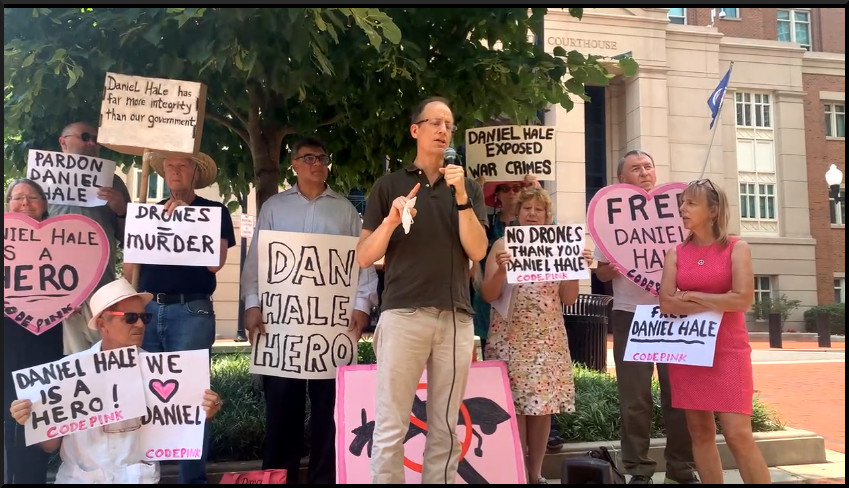 It is outrageous that Daniel Hale was charged, prosecuted and sentenced to 45 months in Federal prison for exposing a criminal program. Daniel Hale should be pardoned!

Since the Nuremberg Tribunal we have been taught that “just following orders” is not a defense. Soldiers, even in time of war, have a moral obligation to oppose illegal orders in every possible way, especially the killing, for any reason, of non-combatants.  Read More …

Video of the Press Conference for Daniel Hale

There will be a press conference for Daniel in New York City, on July 17 @ 10:00 am with a number of speakers.  Media Advisory.   Program for Press Conference.  The Press Conference will be held at 10th Avenue and West 30th Street.

Daniel’s sentencing is July 27 @ 9:00 AM, in the Alexandria VA Courtroom.  If you would like to attend, the details are here.

Ed Kinane of Upstate Drone Action is one of several people whose criminal trials for protesting at Hancock Air Force Base outside of Syracuse have been delayed due to COVID. Kinane discusses how drones are used to kill people in Afghanistan and how the courts have handled previous protests. With Mark Dunlea for Hudson Mohawk Radio Network.

February 14, 2021: Valentines Day A moment of light in the darkness. @ Hancock Base. Our message.

June 20, 2020: Weaponized drones are the knee on the throat of people of color all over the world.  Dewitt Caravan and Vigil at Hancock Base See Video, Read Statement: Pandemic & Militarism

Earth Day at Hancock Base: World on Fire!

We are gathering at Hancock Field as the 174th Attack Wing pilots drones, murdering people in Afghanistan, the Middle East and Africa. They are one component of the vast military mega machine which relentless;u consumes fossil fuels. The U.S. military is the single biggest institutional emitter of carbon dioxide in the world. It emits more CO2 than most nation-states

What we stand for is what we stand on, our lovely mother planet Earth. Please help us defend her.

This event is sponsored by Upstate Drone Action. No arrests are planned. Masks are required and social distancing will be practiced. We will stand a least six feet apart. Bring friends. Park on the south shoulder of East Molloy.

Valentines Day at Hancock Base:

“What if what you do to survive kills the things you love?” Bruce Springsteen asks this poignant question in a song (Devils and Dust) about a soldier fighting in Iraq. Our nation has been in a downward spiral. Beginning with the wars in Afghanistan and Iraq, now in free fall with the COVID 19 pandemic, the collapsing economy and the January 6 Capitol Insurrection, we are impelled to ask this very question today. Have we killed the things we love?

Have we become Drone Nation? Are all of us, in one way or another, just following orders and remotely controlled (directly or indirectly), or do we still have the capacity for following our conscience and our freedom of choice?

Martin Luther King, Jr. taught us to know, “Love is the only force capable of transforming an enemy into a friend” – – which points to a very real solution so sadly overlooked by our government. So little money spent on friendship and love and helping people and so much money on war.

Dr. Cornel West, a man who has stood with us in front of this very gate at Hancock Field, reminds us, “Never forget, justice is what love looks like in public.” Have our seemingly endless wars and the use of force brought justice to this nation today?

We are here because of the 174th’s drone assassination program, and we are here because of love. We know you are our brothers and sisters and are part of our collective family. Paul Connett, new to our group, spoke eloquently at the last vigil. He said,“to kill people anonymously, from thousands of miles away, from an office, it is a different kind of warfare.” This is bringing us all low.

We ask you to look deeply within. Is what you are doing to survive destroying your conscience and destroying the things you love?

The event is endorsed by:

Knee on the Throat of the World

Was Hancock Drone Base Responsible?
30 Afghans on Pine Nut farm killed by US Drone Strike. 6 Arrested at Hancock Field holding a banner which stated
“Drones Fly, Children Die – Our Hearts Are Breaking”

Syracuse, NY. Tuesday, September 24, 2019. At approximately 10:30 am, six members of Upstate Drone Action (UDA) were arrested while expressing deep anguish and grief over the recent US drone attack in Afghanistan responsible for killing at least 30 pine nut workers and for the numerous other civilians slaughtered by the USAF and US government. Holding a banner which stated “Drones Fly, Children Die, Our Hearts Are Breaking”, the six members of UDA requested the Sheriff’s department enforce the law and stop the killings by the drone assassination program conducted at Hancock field (and other USAF bases across the nation.) With the veil of secrecy and lack of full disclosure, which drone attack center is responsible for this latest slaughter presently remains unknown to the American public. Will anyone ever be held responsible for these wrongful deaths? The six arrested were Ed Kinane, Ann Tiffany, Julienne Oldfield, Rae Kramer and Les Billips, of Syracuse, NY and Mark Scibilia-Carver of Trumansburg, NY, while standing at the main gate entrance of Hancock Field, East Molloy Road, Syracuse, NY. Press Release and Statement.

8 Arrested Protesting Killer Drone Assassinations at Hancock Air National Guard Base
DeWitt, NY – This morning, eight longtime members of the Upstate Drone Action Coalition were arrested for blocking the entrance to Hancock Airbase, home of the 174th Attack Wing. The blockade was composed of a tableau representing the aftermath of a drone strike with mothers grieving their slain children. Protesters used two large banners stating, “Drones Fly, Children Die: Our Hearts are Breaking!” and “Children are not collateral damage!” A grim reaper wheeled an 8’ high, 6’ long scale model of an MQ-9 Reaper drone through the tableau.

Love is the Solution